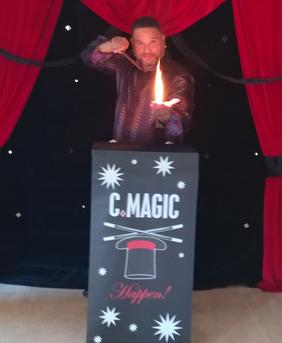 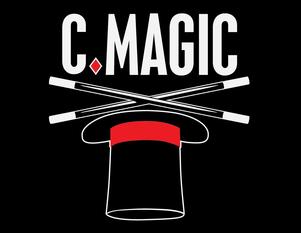 During these special times, we at C. Magic Happen Entertainment, LLC, are doing our best to advocate social distancing, wearing of masks, and practicing safe measures. However, we can not mandate that everyone must wear masks or take proper precautions, but it would be advantageous to do so! Nevertheless, C. Magic Happen Entertainment, LLC is open for business as usual!

While serving in the U. S. Navy on board the USS Gray, Clarence once again was bitten by the magic bug after seeing a card trick that astonished him. In order to learn the card trick it cost him $20.00, a pack of cigarettes, a can of Coca Cola, and an hour of his time after the crew went to bed. Needless to say, that card trick has stayed with him until this very day. One can even say that was C. Magic's real first experience with sleight of hand.

During his career as a Professional Firefighter / EMT in the City of Chester Fire Department, Clarence would not only  utilize that one card trick, but he advanced into doing gags on his fellow firefighters, and that opened the door for him as a prankster. In 1994, Clarence started his first business called Heart Start Emergency Response Training, Inc., a non-profit organization created to serve the community, businesses, schools, adult and childcare centers, other medical centers with CPR/AED and Basic First Aid and life-saving skills and training. He would often use his card trick and gags as an "Ice Breaker" to relax and set the pace for his special style of training.

In 2012, after 23 years of dedicated service in the fire department, Clarence retired and began working as a Barber Instructor for the American Beauty Academy. In 2014, he opened his second business, Prestigious Kuts Barbershop, which served the community of Wilmington, DE.

Clarence moved to Chicago, IL in 2014 to expand his CPR and First Aid business. Always staying innovative and creative, a few months later he met his mentor, Magic Sam while visiting a well know magic shop. A veteran of magic, Magic Sam gladly embarked on helping, now C. Magic, to write the next chapter in his book of life. Clarence has worked diligently to hone his new craft of performing magic, illusions, and mentalism. He and Magic Sam regularly have their practice sessions where they both now inspire and learn from each other while having fun and staying prolific in the art of magic.

C. Magic, has established his latest entrepreneurial business called, C. Magic Happen Entertainment, LLC; he did several background episodes on "Chicago PD" and "Chicago Med"; he has won three awards, the I.B.M. Ring 43 "...EST" award for his "Staple Gun Roulette" routine, the S.A.M. Chicago Magic Competition "People's Choice" award, and the I.A.B.M.A. "Online Video of the Year" award. In 2018, C. Magic was presented with the first PGWAC/GOAT "Entertainer of the Year Award". He continues to market himself and post videos on his social media sites.

C. Magic has traveled to Europe and performed his special style of magic, in front of Buckingham Palace, on top of the Eiffel Tower, and inside the walls of the Colosseum. What a fantastic experience to say the least. Since returning home, he has showcased his magical talents at the Comedy Zone Charlotte, and wowed the crowd. C. Magiccreated, produced, and marketed "The Double Trouble Magic Show," which he co-host with Eric "Houdini" Johnson. Their act was featured on WBTV Charlotte: "On Your Side" and Fox 46 Charlotte: "Good Day Charlotte." After moving to Atlanta, he appeared on WXIA 11 Alive: "Atlanta and Company."